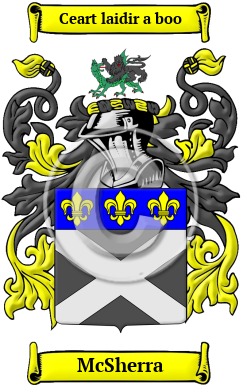 Most of the old Irish surnames that can be found throughout the world today have their roots in the Gaelic language. The original Gaelic form of the name McSherra is Mac Giolla Phadraig, denoting a devotee of St. Patrick. This is the only native-Irish surname with the prefix "Fitz", as all others descend from the Normans.[1]

Early Origins of the McSherra family

The surname McSherra was first found in Ossory (Irish: Osraige), the former Kingdom of Ossory, now county Kilkenny, located in Southeastern Ireland in the province of Leinster, where they were the traditional Princes of Ossary, claiming descent from the O'Connors [2] and Giolla Padraig, a warlike chief in Ossary who lived in the second half of the 10th century. [1]

Early History of the McSherra family

Scribes and church officials, lacking today's standardized spelling rules, recorded names by how they were pronounced. This imprecise guide often led to the misleading result of one person's name being recorded under several different spellings. Numerous spelling variations of the surname McSherra are preserved in documents of the family history. The various spellings of the name that were found include Fitzpatrick, Fitzpatricks, Kilpatrick, Shera, Sherar, Sherra, Patchy, Patchie, Parogan, Parrican, Fitz, MacGilpatrick, McGilpatrick, MacIlpatrick, McIlpatrick, MacSherra, McSherra, McShera, MacShera, Sheera, McSheera and many more.

Notable amongst the family name at this time was Sir Barnaby Fitzpatrick, (1535?-1581), one of the first to submit to Henry VII and was knighted for his allegiance in 1558. He was the son and heir of Brian Fitzpatrick or MacGillapatrick, first lord...
Another 43 words (3 lines of text) are included under the topic Early McSherra Notables in all our PDF Extended History products and printed products wherever possible.

Migration of the McSherra family

In the 18th and 19th centuries, thousands of Irish families fled an Ireland that was forcibly held through by England through its imperialistic policies. A large portion of these families crossed the Atlantic to the shores of North America. The fate of these families depended on when they immigrated and the political allegiances they showed after they arrived. Settlers that arrived before the American War of Independence may have moved north to Canada at the war's conclusion as United Empire Loyalists. Such Loyalists were granted land along the St. Lawrence River and the Niagara Peninsula. Those that fought for the revolution occasionally gained the land that the fleeing Loyalist vacated. After this period, free land and an agrarian lifestyle were not so easy to come by in the East. So when seemingly innumerable Irish immigrants arrived during the Great Potato Famine of the late 1840s, free land for all was out of the question. These settlers were instead put to work building railroads, coal mines, bridges, and canals. Whenever they came, Irish settlers made an inestimable contribution to the building of the New World. Early North American immigration records have revealed a number of people bearing the Irish name McSherra or a variant listed above, including: John and Edward Fitzpatrick who landed in Virginia in 1774; William Fitzpatrick settled in New York in 1817; Betty Fitzpatrick settled in Charlestown Massachusetts in 1803.