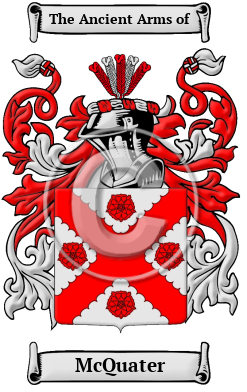 Early Origins of the McQuater family

The surname McQuater was first found in Ayrshire (Gaelic: Siorrachd Inbhir Àir), formerly a county in the southwestern Strathclyde region of Scotland. The name was originally in Gaelic MacBhaltair, and literally translates as 'son of Walter .' Some of the first records of the family in Scotland were John Makwatter and Ewin McWalter, followers of the Earl of Cassilis, who were respited for murder in 1526. Later, John Graham McWalter in Duchry was fined for reset of outlawed Macgregors in 1613 as was Parian M'Walter of Auchinvennell in 1619. [1]

After the Norman Conquest of England many of Duke William's rebellious Barons moved north. The border became a convenient but turbulent no-man's land where the persecuted Many were given land by King Malcolm Canmore and later by King David of Scotland. Some were native Scots. In the 16th century they became known as the 'unruly clans'.

Over on the Isle of Man, Qualtrough is "contracted from Mac Walter, 'Walter's Son'. Thomas MacWalter, was constable of Bunfinn, A.D. 1308. In Rushen and Arbory half the population is called either Qualtrough or Watterson, and in Malew one fourth." [2]

Early History of the McQuater family

More information is included under the topic Early McQuater Notables in all our PDF Extended History products and printed products wherever possible.

McQuater migration to the United States +

McQuater Settlers in United States in the 20th Century