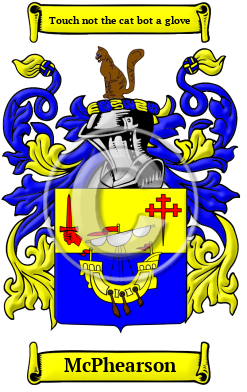 The descendants of the clans of the ancient Scottish tribe known as the Picts were the first to use the name McPhearson. It was a name for a parson. The Gaelic forms of the names are Mac a' Phearsain and Mac a Phearsoin, which mean son of the parson. This was the surname of various ecclesiastical families in Scotland and is descended from a Chief of the great Clan Chattan ('tribe of the cats'), called Gille Chattan. This Chief can, in turn, be traced back to Feachar the Long, King of Lorn who died in 697 AD. The Clan's original territories were in Stratthnairn, Strathdearn and Badenoch from whence they long contested the leadership of the Clan Chattan with the MacKintoshes, who also claimed descent from the Gille Chattan through a female heiress.

Early Origins of the McPhearson family

The surname McPhearson was first found in Inverness, where they were hereditary keepers of the sacred stone of St. Catan, and early Chief of the Clan Chattan. The MacPhersons are sometimes called the Clan Mhuirich, 'the children of Muredach,' from an early Chief of the Clan, Duncan (the Parson) who was imprisoned with the Lord of the Isles after the Battle of Harlaw (1411).

Early History of the McPhearson family

Before the first dictionaries appeared in the last few hundred years, scribes spelled according to sound. spelling variations are common among Scottish names. McPhearson has been spelled MacPherson, McPherson, MacPhersone, Mac a' Phearsoin (Gaelic) and many more.

Notable amongst the Clan at this time was James MacPherson (1675-1700), the Scottish outlaw, famed for his Lament or Rant supposedly written on the eve of his execution, a version of which was rewritten by Robert Burns; and Colonel Duncan MacPherson, the Clan Chief, who commanded...
Another 45 words (3 lines of text) are included under the topic Early McPhearson Notables in all our PDF Extended History products and printed products wherever possible.

In the United States, the name McPhearson is the 16,077th most popular surname with an estimated 2,487 people with that name. [1]

Migration of the McPhearson family

In those unstable times, many had no choice but to leave their beloved homelands. Sickness and poverty hounded travelers to North America, but those who made it were welcomed with land and opportunity. These settlers gave the young nations of Canada and the United States a strong backbone as they stood up for their beliefs as United Empire Loyalists and in the American War of Independence. In this century, the ancestors of these brave Scots have begun to recover their illustrious heritage through Clan societies and other heritage organizations. Early passenger and immigration lists reveal many Scottish settlers bearing the name McPhearson: Aeneas MacPherson, who arrived in Pennsylvania in 1685; Alexander McPherson, who settled in south Carolina in 1716; along with Angus, Daniel, Donald, Duncan, John.