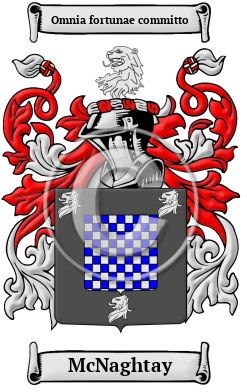 Early Origins of the McNaghtay family

The surname McNaghtay was first found in Dumfriesshire (Gaelic: Siorrachd Dhùn Phris), a Southern area, bordering on England that today forms part of the Dumfries and Galloway Council Area. The name is "a variant of Macnaught (of Kilquhanite, Galloway)" [1]

Early History of the McNaghtay family

Notable amongst the family at this time was John McKnawcht, Burgess of Edinburgh in 1612. He may be the same person as John M'Nacht, merchant burgess in the parish of Kirkpatrick- Durham in...
Another 31 words (2 lines of text) are included under the topic Early McNaghtay Notables in all our PDF Extended History products and printed products wherever possible.

Migration of the McNaghtay family to Ireland

Some of the McNaghtay family moved to Ireland, but this topic is not covered in this excerpt.
Another 124 words (9 lines of text) about their life in Ireland is included in all our PDF Extended History products and printed products wherever possible.

Migration of the McNaghtay family