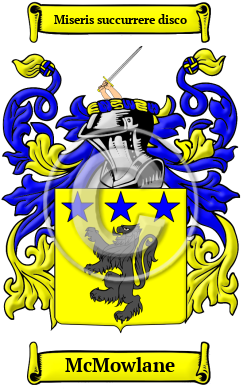 Scotland's coastal mountains and Hebrides islands were known in ancient times as the kingdom of Dalriada. The name McMowlane evolved there as a nickname for a bald person; the name may refer to a member of a religious order. The Gaelic forms of the name are Mac Mhaolain or Mac Ghille Mhaoil, both of which mean son of the bald or tonsured one.

Early Origins of the McMowlane family

The surname McMowlane was first found in at Tayside, where in 1263 Cilleonan MacMolan appears on documents. [1] They arrived in Strathtay from the lands in Loch Arkaig after King Malcolm IV transplanted many Clans, including the MacMillans, from that region about 1160 AD. Later, about 1350, the Camerons, who had changed their name to Chalmers, drove them from their Strathtay territories.

Early History of the McMowlane family

Spelling in the medieval era was a highly imprecise process. Translation, particularly from Gaelic to English, was little better. For these reasons, early Scottish names are rife with spelling variations. In various documents McMowlane has been spelled MacMillan, MacMullan, MacMullen, McMullen, McMullin, McMullan, McMillan, MacMullin and many more.

Notable amongst the Clan from early times was Sir Duncan Macmolane, a Pope's knight, chaplain of the collegiate church of Kilmone, 1452; John Macmulan (Makmilane, or Makmylan), bailie (baillie) of Glasgow in 1454; Sir Fingon Makmulane, who was presented in 1540 to the chaplainry of Tibbermore in the diocese of...
Another 49 words (4 lines of text) are included under the topic Early McMowlane Notables in all our PDF Extended History products and printed products wherever possible.

Migration of the McMowlane family to Ireland

Some of the McMowlane family moved to Ireland, but this topic is not covered in this excerpt.
Another 89 words (6 lines of text) about their life in Ireland is included in all our PDF Extended History products and printed products wherever possible.

Migration of the McMowlane family

Many settled along the east coast of what would become the United States and Canada. As the American War of Independence broke out, those who remained loyal to the crown went north to Canada as United Empire Loyalists. The ancestors of all of these hardy Dalriadan-Scottish settlers began to recover their collective history in the 20th century with the advent of the vibrant culture fostered by highland games and Clan societies in North America. Highland games, clan societies, and other organizations generated much renewed interest in Scottish heritage in the 20th century. The McMowlane were among the earliest of the Scottish settlers as immigration passenger lists have shown: Archibald McMillan settled in Wilmington N.C. in 1774; along with Ivor and his wife Jean, James, Malcolm his wife Catherine and three sons; John McMillan was banished from the west country of England and arrived in New England in 1685.