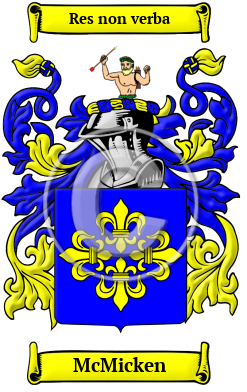 The McMicken surname is an Anglicized form of the Gaelic Mac Miadhachàin, a patronymic name meaning son of Miadhachàin, the root word of which is "miadhach," meaning "honourable."

Early Origins of the McMicken family

The surname McMicken was first found in Galloway, and in Ayrshire.

Early History of the McMicken family

More information is included under the topic Early McMicken Notables in all our PDF Extended History products and printed products wherever possible.

Migration of the McMicken family to Ireland

Some of the McMicken family moved to Ireland, but this topic is not covered in this excerpt.
Another 57 words (4 lines of text) about their life in Ireland is included in all our PDF Extended History products and printed products wherever possible.

McMicken migration to the United States +

McMicken Settlers in United States in the 18th Century

Historic Events for the McMicken family +