Early Origins of the McKlemoyle family

The surname McKlemoyle was first found in County Monaghan. The McElmoyle variants are distinct and are found in Antrim and Derry. [2] Over in Scotland, records are quite late as in "Mc illemayll 1636. Mary Ncllvoil, 1704, appears in 1706 as Mor Nclllimoile." [3] However, the same source notes an earlier spelling of "M'Ilmoil (M'Gille Mhaoil). An Islay surname now sometimes rendered [as] Bell. Donald M'Gillemoyll was a sufferer from the hership of Petty in 1502, and John Makmul was bowman in Lochalsh, 1548." [3] Furthermore,we would be sadly remiss if we did not mention the connection to the MacMillan family. The latter name was derived from the Gaelic name MacMhaolain or MacGhilleMhaoil, meaning "son of the bald or tonsured one." [3]

Early History of the McKlemoyle family

This web page shows only a small excerpt of our McKlemoyle research. More information is included under the topic Early McKlemoyle History in all our PDF Extended History products and printed products wherever possible.

More information is included under the topic Early McKlemoyle Notables in all our PDF Extended History products and printed products wherever possible.

Migration of the McKlemoyle family 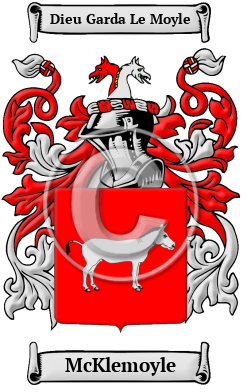