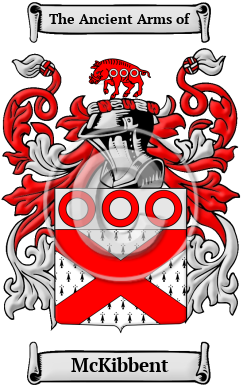 Early Origins of the McKibbent family

The surname McKibbent was first found in counties of Mayo and Limerick, where two distinct families arose shortly after Strongbow invasion of Ireland in 1172. The majority of the family hails from Mayo and were a branch of the great Burke family.

Early History of the McKibbent family

Names were simply spelled as they sounded by medieval scribes and church officials. Therefore, during the lifetime of a single person, his name was often spelt in many different ways, explaining the many spelling variations encountered while researching the name McKibbent. Some of these variations included: Fitzgibbon, Fitzgibbons, MacGibbon, Gibbon, Gibbons, Gibben, Gibbens, Gibbin, Gibbins and many more.

Migration of the McKibbent family

Irish immigration to North American began in the late 18th century as many Irish families desired to own their own land. This pattern of immigration grew slowly yet steadily until the 1840s. At that time, a failed crop and a growing population in Ireland resulted in the Great Potato Famine. Poverty, disease, and starvation ravaged the land. To ease their pain and suffering the Irish often looked upon North America as a solution: hundreds of thousands undertook the voyage. Their arrival meant the growth of industry and commerce for British North America and the United States. For the individual Irishman, it meant survival and hope, and the opportunity for work, freedom, and ownership of land. The early immigration and passenger lists revealed many bearing the name McKibbent: Daniel, George, John, Michael, James, Nicholas, and Patrick Fitzgibbon who all arrived in Philadelphia between 1840 and 1865; Ann Gibbon settled in Virginia in 1660.