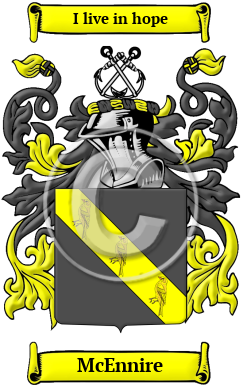 The ancestors of the first family to use the name McEnnire lived among the ancient Scottish people called the Picts. The McEnnire family lived in the lands of Kinnear, which lie near Wormit in the county of Fife. [1] The name literally means "chieftain." [2]

Early Origins of the McEnnire family

The surname McEnnire was first found in Fife, from the lands of Kin-near near Wormit. The family descend from "Symon, son of Michael, [who] gave a carucate of land of Cathelai to the church of St. Andrews. His grant was confirmed by King Malcolm IV, and King William confirmed the grant of Chathelach, with common pasture for twenty-four beasts, and eighty sheep, which Symon, son of Michael gave, and his son Alan confirmed. The descendants of Symon took the name of Kinnear, and were the vassals of the Priory of St. Andrews in the lands of Kathlac, etc., which they held till the beginning of the eighteenth century. Reginald de Kener witnessed gift of one mark of silver annually by Alexander, earl of Buchan to the Abbey of Arnbroath, c. 1250." [3]

Early History of the McEnnire family

In the Middle ages, spelling and translation were not yet regulated by any general rules. spelling variations in names were common even among members of one family unit. McEnnire has appeared Kinnear, Kynnier, Kynnair, Kenneir, Kinner, Kinnier, MacEnir and many more.

Notable amongst the Clan at this time was Petrus Kyrior who was elected common councillor of Aberdeen, 1477; John de Kynor who was admitted burgess of Aberdeen, 1439; and Adam Kynnor in 1457. [3] Sir John MacDonald Kinneir (1782-1830), was Lieutenant-Colonel H.E.I.C.S., traveller and diplomatist, born at Carnden, Linlithgow, on 3 Feb. 1782, and was the son of John Macdonald, comptroller of customs at Borrowstounness, and Mrs. Cecilia Maria Kinneir. "In 1802 he was nominated to a cadetship by Sir William Bensley, under the name...
Another 84 words (6 lines of text) are included under the topic Early McEnnire Notables in all our PDF Extended History products and printed products wherever possible.

Migration of the McEnnire family to Ireland

Some of the McEnnire family moved to Ireland, but this topic is not covered in this excerpt. More information about their life in Ireland is included in all our PDF Extended History products and printed products wherever possible.

Migration of the McEnnire family

Faced by this persecution and the generally unstable political climate of those days, many Scots chose to leave their homeland for Ireland, Australia, and North America in search of greater opportunity and freedom. The colonies across the Atlantic were the most popular choice, but a passage there was neither cheap nor easily suffered. Passengers arrived sick and poor, but those who made it intact often found land and more tolerant societies in which to live. These brave settlers formed the backbone of the burgeoning nations of Canada and the United States. It is only this century that the ancestors of these families have begun to recover their collective identity through the patriotic highland games and Clan societies that have sprung up throughout North America. Research into early immigration and passenger lists revealed many immigrants bearing the name McEnnire: John and Elizabeth Kinner settled in New York in 1774; with sons Nicholas and Anthony and daughter Elizabeth; David Kinnear arrived in Philadelphia in 1844.