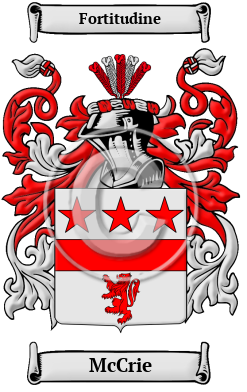 McCrie was first used as a surname among the descendants of the ancient Scottish people known as the Picts. It was a name for a prosperous person. The Gaelic form of the surname McCrie is Mac Rath, which literally means son of grace or son of prosperity.

Early Origins of the McCrie family

The surname McCrie was first found in Inverness-shire (Gaelic: Siorrachd Inbhir Nis) divided between the present day Scottish Council Areas of Highland and Western Isles, and consisting of a large northern mainland area and various island areas off the west coast, the shire was anciently both a Pictish and Norwegian stronghold, but their ancient history is often clouded with conjecture. It appears certain that they lived before the 14th century at Clunes, to the west of Inverness in the territories of the Fraser Clan. Consequently the family has always been friendly towards that Clan. From about 1400, they moved to the location with which they are readily associated, Kintail.

Early History of the McCrie family

Notable amongst the Clan at this time was Finghin MacCarthy Reagh (c.1425-1505), the 8th Prince of Carbery from 1477 to 1505, belonged to the MacCarthy Reagh dynasty; the Earl of Seaforth who forfeited his lands in 1715, but in 1764 was allowed to buy the lands back from the Government. In gratitude he offered to raise a regiment to be known as the Seaforth Highlanders (the 78th Regiment). Composed largely of MacKenzies and MacRaes (always loyal supporters of the MacKenzies whose Chief commanded the Regiment), it was embodied at Elgin in May 1778...
Another 92 words (7 lines of text) are included under the topic Early McCrie Notables in all our PDF Extended History products and printed products wherever possible.

Migration of the McCrie family to Ireland

Some of the McCrie family moved to Ireland, but this topic is not covered in this excerpt.
Another 59 words (4 lines of text) about their life in Ireland is included in all our PDF Extended History products and printed products wherever possible.

Migration of the McCrie family

In those unstable times, many had no choice but to leave their beloved homelands. Sickness and poverty hounded travelers to North America, but those who made it were welcomed with land and opportunity. These settlers gave the young nations of Canada and the United States a strong backbone as they stood up for their beliefs as United Empire Loyalists and in the American War of Independence. In this century, the ancestors of these brave Scots have begun to recover their illustrious heritage through Clan societies and other heritage organizations. Early passenger and immigration lists reveal many Scottish settlers bearing the name McCrie: Hugh MacCrae settled in New York in 1774; James, Daniel, Henry, John, Patrick, Robert, William MacCrea all arrived in Philadelphia between 1800 and 1870.

Historic Events for the McCrie family +