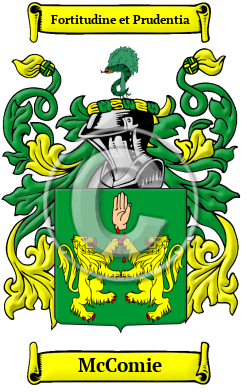 The McComie name is likely derived from either "MacGiolla Choimdheadh" or "O Camtha." The Gaelic word "coimdheadh" means "lord" or "protector," while "camtha" means "bent or crooked." Some of the variations of this name found mostly in Ulster, such as MacComie are most likely derivatives of MacComb, a sept of the Scottish Clan Mackintosh, but already well established in Ulster by 1659, and Petty's census of Ireland.

Early Origins of the McComie family

The surname McComie was first found in Breffny, and Cork in the south of Ireland, as well as in Ulster. There are no doubt two different sources of this same name, with those in the south being native Irish Gaelic names.

Early History of the McComie family

This web page shows only a small excerpt of our McComie research. Another 33 words (2 lines of text) covering the years 1571 and 1596 are included under the topic Early McComie History in all our PDF Extended History products and printed products wherever possible.

More information is included under the topic Early McComie Notables in all our PDF Extended History products and printed products wherever possible.

McComie migration to the United States +

McComie Settlers in United States in the 17th Century