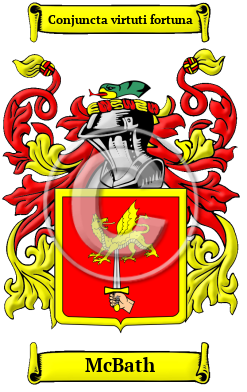 The western coast of Scotland and the desolate Hebrides islands are the ancient home of the McBath family. Their name is derived from the names of Macbeth and Bethune, or Beaton. The Macbeth and Bethune families, who were hereditary physicians to the Chiefs of Macdonald, practiced medicine on the Isles during the Middle Ages and their names merged in English into the one surname of Beaton. The Macbeths were concentrated in Islay and Mull, whereas the Beatons were concentrated in Skye.

Early Origins of the McBath family

The surname McBath was first found in the Isle of Islay, where legend has it that the progenitor of this Clan is none other than Macbeth (Mac Bethad mac Findláich) (1005-1057), the High Steward of Moray. As his mother was a daughter of King Kenneth III, and he married Grudoch, a daughter of the son of King Kenneth III, he had as much of a claim to the Scottish throne as King Duncan I. MacBeth, therefore, challenged Duncan and defeated him in battle in 1040, assuming the throne.

Known in English simply as Macbeth, he was last Celtic king of Scotland, ruling from 1040 to 1057, when he died in battle against future king Malcolm of the Canmore dynasty.

He is best known through the Shakespearean drama bearing his name. Thespians rarely mention the play by the name and typically call it "the Scottish play" as they believe that by uttering the name brings one bad luck.

Early History of the McBath family

This web page shows only a small excerpt of our McBath research. Another 184 words (13 lines of text) covering the years 1545, 1600, 1609, and 1763 are included under the topic Early McBath History in all our PDF Extended History products and printed products wherever possible.

The medieval practice of spelling according to sound and repeated translation between Gaelic and English created many spelling variations of the same name. McBath has been recorded as McBeth, Beaton, Beeton, MacBeth, MacBeaton, McBee and many more.

More information is included under the topic Early McBath Notables in all our PDF Extended History products and printed products wherever possible.

McBath migration to the United States +

Descendents of Dalriadan-Scottish families still populate many communities across North America. They are particularly common in Canada, since many went north as United Empire Loyalists at the time of the American War of Independence. Much later, in the late 19th and early 20th centuries, the highland games and Clan societies that now dot North America sprang up, allowing many Scots to recover their lost national heritage. Some of the first immigrants to cross the Atlantic and come to North America bore the name McBath, or a variant listed above:

McBath Settlers in United States in the 19th Century