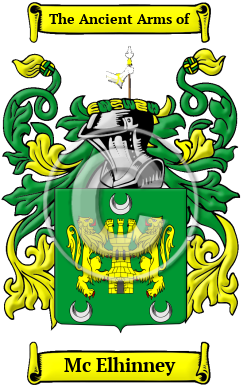 The surname Mc Elhinney was first found in County Derry, where the sept was of the Cenel Eoghain group.

Saint Cainnech or Cannicus (d. 598?), was "Abbot of Achadh-bo, and the patron saint from whom Kilkenny (Cill-Cainnech) receives its name, has been generally identified with the more famous St. Kenneth or Kenny, to whom so many Scotch churches have been dedicated. Most of the early authorities state that he died between 598 and 600 A.D., at the age of eighty-four. This gives from 514 to 516 as the year of his birth." [1]

The St. Canice branch of whom they were originally followers, came from Dromachose, County Derry. Of this branch, David de Kilkenny, was Bishop of Achonry, County Sligo (1312 to 1344.) Ironically the name is not taken from the town in Leinster or the county named Kilkenny. References to the surname were rare throughout history. [2]

This web page shows only a small excerpt of our Mc Elhinney research. Another 86 words (6 lines of text) covering the years 1690 and 1866 are included under the topic Early Mc Elhinney History in all our PDF Extended History products and printed products wherever possible.

Another 42 words (3 lines of text) are included under the topic Early Mc Elhinney Notables in all our PDF Extended History products and printed products wherever possible.

Mc Elhinney Settlers in United States in the 19th Century

Mc Elhinney Settlers in United States in the 20th Century