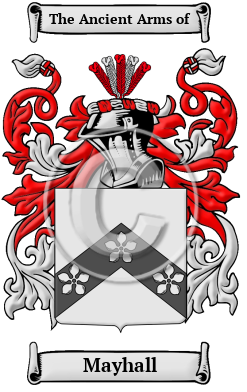 The distinguished surname Mayhall is one of the many names that was brought to England in the wake of the Norman Conquest of 1066. The name is derived from the Middle English personal name "Mihel," which was a vernacular form of "Michael," meaning "Who is like the Lord?" [1]

Early Origins of the Mayhall family

The surname Mayhall was first found in Norfolk, where the given name Mihel is thought to have emerged. A very rare name, the earliest known bearer of the surname was John Mihell, who was recorded in the Subsidy Rolls of Suffolk in 1524. Mihil Cristen was listed in 1549. [2] The family has a long history in Oldham, Lancashire.

Early History of the Mayhall family

This web page shows only a small excerpt of our Mayhall research. Another 104 words (7 lines of text) covering the years 1524, 1603, 1796, 1830 and 1870 are included under the topic Early Mayhall History in all our PDF Extended History products and printed products wherever possible.

Another 37 words (3 lines of text) are included under the topic Early Mayhall Notables in all our PDF Extended History products and printed products wherever possible.

In the United States, the name Mayhall is the 15,417th most popular surname with an estimated 2,487 people with that name. [3]

Migration of the Mayhall family

Some of the first settlers of this family name or some of its variants were: James Mayell, who settled in Barbados in 1658; William Mayell, who was naturalized in New York in 1797; William Mayall, who was living in Delaware in 1812.