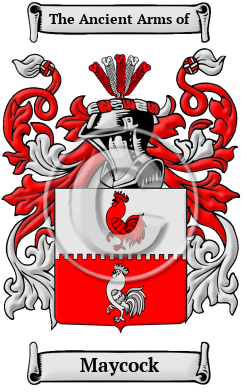 Early Origins of the Maycock family

"This surname is derived from the name of an ancestor. 'the son of Matthew'. The variant Mocock, afterwards Mycock, seems to have been popular in East Lancashire and over the border into West Riding of Yorkshire. It still remains in Manchester and district." [2]

Early History of the Maycock family

This web page shows only a small excerpt of our Maycock research. Another 95 words (7 lines of text) covering the years 1323, 1327, 1455 and 1487 are included under the topic Early Maycock History in all our PDF Extended History products and printed products wherever possible.

Spelling variations of this family name include: Maycock, Moycock, Mycock, Meacock, Mocock, Macock and many more.

More information is included under the topic Early Maycock Notables in all our PDF Extended History products and printed products wherever possible.

Maycock migration to the United States +

Maycock Settlers in United States in the 17th Century

Maycock Settlers in United States in the 19th Century

Maycock Settlers in Australia in the 19th Century

Historic Events for the Maycock family +