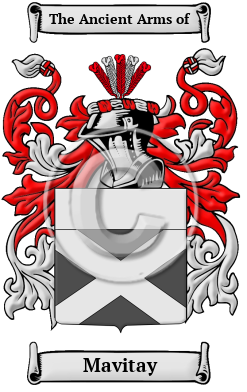 The Strathclyde-Briton people of ancient Scotland were the first to use the name Mavitay. The Mavitay family lived in the place called Moffatt, in Scotland. The place-name is derived from the Gaelic words magh and fada, which mean field and long. Hence, the surname Mavitay means, from the long field.

Early Origins of the Mavitay family

The surname Mavitay was first found in Dumfriesshire (Gaelic: Siorrachd Dhùn Phris), a Southern area, bordering on England that today forms part of the Dumfries and Galloway Council Area, at Annandale where the first on record was Nicholas de Mufet who began his life as a simple cleric and was first recorded as witness to a charter by Walter, bishop of Glasgow, some time before 1232. Approximately twenty years later, in 1250, he was made Archdeacon of Theuidale and eventually, in 1268, he was made Bishop of Glasgow. After only two years of holding the position of bishop, he died, in the year 1270. [1]

Early History of the Mavitay family

The variation in the spelling of Medieval names is a result of the lack of spelling rules in the English language prior to the last few hundred years. Before that time, scribes spelled according to sound, often varying the spelling of name within a single document. Mavitay has appeared as Moffatt, Maffat, Maffett, Maffet, Moffat, Moffet, Moffett, Moffert, Moffertt, Moffit, Moffitt, Merphet, Merphett, Merfet, Merfett, Murphat, Murphatt, Murphet, Murphett, Muffat, Muffatt, Muffett, Muffet, Muffit and many more.

Notable amongst the family at this time was Thomas Muffet (also Moufet, Mouffet, or Moffet) (1553-1604), an English naturalist and physician, best known for his Puritan beliefs, his study of insects in regard to medicine; and Robert Moffat (1795-1883). Starting off as a gardener, he decided to become a missionary...
Another 49 words (4 lines of text) are included under the topic Early Mavitay Notables in all our PDF Extended History products and printed products wherever possible.

Migration of the Mavitay family to Ireland

Some of the Mavitay family moved to Ireland, but this topic is not covered in this excerpt.
Another 70 words (5 lines of text) about their life in Ireland is included in all our PDF Extended History products and printed products wherever possible.

Migration of the Mavitay family

As the persecution of Clan families continued, they sailed for North America in increasing numbers. In most cases, they found the freedom and opportunity they sought. Land was often available and the American War of Independence allowed Scots an opportunity to solidify their independence from the English crown. These settlers and their ancestors went on to play essential roles in the forging of the nations of the United States and Canada. Among them: Jean Moffat who settled in New Jersey in 1685; Thomas Moffatt settled in Boston Massachusetts in 1712; William Moffert settled in Philadelphia, Pennsylvania in 1880.