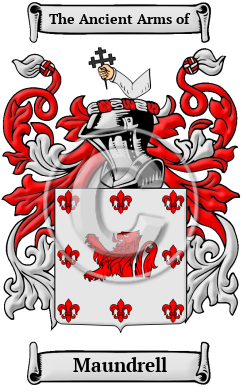 The ancestors of the Maundrell surname lived among the ancient Anglo-Saxon culture. The name comes from when they lived in Yorkshire where Maundrell "is derived from the name of an ancestor. 'the son of Maundrell'." [1]

Early Origins of the Maundrell family

The surname Maundrell was first found in Yorkshire where in the Yorkshire Poll Tax Rolls of 1379 include: Thomas Maundrell, et Elena uxor ejus. A very rare name, the next entry for the family was found in 1605 when Hemy Mandrell from Wiltshire was listed in the Register of the University of Oxford. [1]

Early History of the Maundrell family

Before English spelling was standardized a few hundred years ago, spelling variations of names were a common occurrence. Elements of Latin, French and other languages became incorporated into English through the Middle Ages, and name spellings changed even among the literate. The variations of the surname Maundrell include Mandrell, Maundrell, Mandrill, Mandrull and many more.

Distinguished members of the family include Henry Maundrell (1665-1701), an English academic at Oxford University from Compton Bassett, Wiltshire and later a Church of England clergyman. As a traveller, he served from 20 December 1695 as chaplain...
Another 37 words (3 lines of text) are included under the topic Early Maundrell Notables in all our PDF Extended History products and printed products wherever possible.

Maundrell Settlers in Canada in the 19th Century