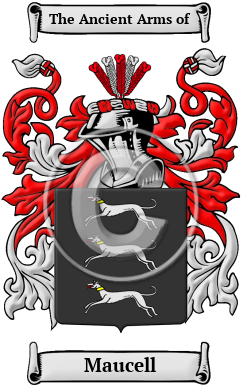 Early Origins of the Maucell family

The surname Maucell was first found in Westmorland where they held a family seat as Lords of the Manor. The Saxon influence of English history diminished after the Battle of Hastings in 1066. The language of the courts was French for the next three centuries and the Norman ambience prevailed. But Saxon surnames survived and the family name was first referenced in the 11th century when they held estates in that shire. One of the first records of the name was Halthe le Machel who was listed there during the reign of Henry I. Humfrey le Machel was also listed in the rolls of Henry II. These latter rolls also lists William Malus Catulus in 1179 and William Manchel in 1206. [1]

Early History of the Maucell family

The first dictionaries that appeared in the last few hundred years did much to standardize the English language. Before that time, spelling variations in names were a common occurrence. The language was changing, incorporating pieces of other languages, and the spelling of names changed with it. Maucell has been spelled many different ways, including Machell, Machael, Mauchel, Mauchell, Machel, Mackell, Mackel, Mauckell, Mauckel, Maukel and many more.

Distinguished members of the family include John Machell (1637-1704), Member of Parliament for Horsham, Sussex, from Hills Place Horsham. in 1663, he courted the sister of Samuel Gott (1614-1671), but Gott would not consent to the match. Machell and a close relative called him to an ale-house where Machell beat...
Another 50 words (4 lines of text) are included under the topic Early Maucell Notables in all our PDF Extended History products and printed products wherever possible.

Migration of the Maucell family

Thousands of English families in this era began to emigrate the New World in search of land and freedom from religious and political persecution. Although the passage was expensive and the ships were dark, crowded, and unsafe, those who made the voyage safely were rewarded with opportunities unavailable to them in their homeland. Research into passenger and immigration lists has revealed some of the very first Maucells to arrive in North America: the name represented in many forms and recorded from the mid 17th century in the great migration from Europe. Migrants settled in the eastern seaboard from Newfoundland, to Maine, to Virginia, the Carolinas, and to the islands..