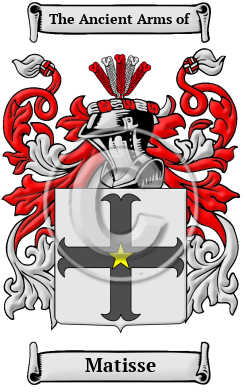 Early Origins of the Matisse family

The surname Matisse was first found in Burgundy (French: Bourgogne), an administrative and historical region of east-central France where the family has held a family seat since early times.

The earliest member of this family was recorded under the name of Mathieu de Vendôme, who died in 1286, and was the Abbot of St. Denis, and was the Regent of France when Saint Louis was on a crusade. The family branched out into: Lyonnais, where they were known as the Mathieu of Mathieu; to Alsace where they settled at Faviers and where they were the Barons Mathieu; to île-de-France where they held a family seat at Mauvieres and were Barons of the Empire in 1810; and to Comtes when they held a family seat at Rouergue and held the title of Count de la Redorte. The Mathieu family from Bourgogne, which originated from Nivernais, goes back to the time when Pierre Mathieu was living, at the end of the fifteenth century.

Among his descendants were: Hugues, an Elect of Charollais in 1682; Christophe J. A. Mathieu de Dombasle, an agronomist from the province of Lorraine, who invented a certain type of plow; David-Maurice-Joseph Mathieu, a General who was later made a Count of the Empire in 1810; Joseph-Ignace Mathieu de Mauvières, Mayor of Saint-Forget, who was named a Baron of the Empire in 1810; and Philippe Mathieu, 1808-1865, a politician and meteorologist.

Jean Mathieu, born in 1637, son of Jean and Isabelle (née Monnachau), was a French butcher that travelled from Angoulême, France to Canada in the 17th century. After arriving in Quebec he married Anne Du Tertre, born in 1654, daughter of Pierre and Louise-Anne (née Goulet), at Château-Richer on 19th November 1669. They settled together at Ange-Gardien until Anne's death on 14th April 1696. Jean passed away on 1st May 1699. [1]

Early History of the Matisse family

This web page shows only a small excerpt of our Matisse research. Another 33 words (2 lines of text) covering the years 1286, 1682, 1808, 1810, and 1865 are included under the topic Early Matisse History in all our PDF Extended History products and printed products wherever possible.

More information is included under the topic Early Matisse Notables in all our PDF Extended History products and printed products wherever possible.

Migration of the Matisse family

Some of the first settlers of this family name or some of its variants were: Joseph Mathieu, who settled in Louisiana in 1756; Jodoin Mathieu settled in Philadelphia in 1805; R. Mathieu, aged 50; settled in Edenton, North Carolina, in 1820.