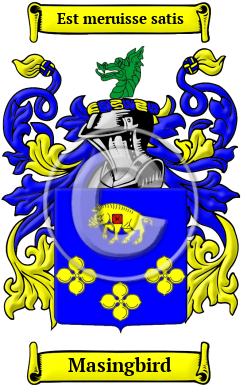 Early Origins of the Masingbird family

The surname Masingbird was first found in Lincolnshire where the family claim decent from Lambert Massyngberd of Soterton, now Sutterton who lived in the reign of Edward I. [1]

Early History of the Masingbird family

This web page shows only a small excerpt of our Masingbird research. Another 154 words (11 lines of text) covering the years 1012 and 1700 are included under the topic Early Masingbird History in all our PDF Extended History products and printed products wherever possible.

More information is included under the topic Early Masingbird Notables in all our PDF Extended History products and printed products wherever possible.

Migration of the Masingbird family

Some of the first settlers of this family name or some of its variants were: William Massingburd settled in Virginia in 1635; R. Massenburg arrived in New Orleans in 1822.

Motto: Est meruisse satis
Motto Translation: It is sufficient to have deserved.