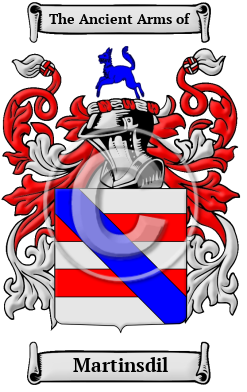 The name Martinsdil first arose amongst the Anglo-Saxon tribes of Britain. It is derived from their having lived in the settlement of Martindale in the county of Westmorland (now part of Cumbria). The surname Martinsdil belongs to the large category of Anglo-Saxon habitation names, which are derived from pre-existing names for towns, villages, parishes, or farmsteads.

Early Origins of the Martinsdil family

The surname Martinsdil was first found in Westmorland, (now Cumbria.) "Martindale is the name of an old Cumberland family dating back to the 14th century, and holding much property in that shire up to the 17th century and later. An ecclesiastical district in Westmorland is thus called." [1] The valley of Martindale lies close to Hawes Water in the Lake District of England. The valley is accessed across Deepdale Beck from Patterdale which is eight miles from Ambleside. The chapelry of Martindale has remained small over the centuries having only 198 people by the late 1800s. [2] Many of the family were found in Yorkshire in the 15th century. The Corpus Christi Guild (Surtees Society) listed Katerina Martyngdale in 1475 and John Markyngdale in 1476. [3]

Early History of the Martinsdil family

This web page shows only a small excerpt of our Martinsdil research. Another 79 words (6 lines of text) covering the years 1623 and 1686 are included under the topic Early Martinsdil History in all our PDF Extended History products and printed products wherever possible.

Another 36 words (3 lines of text) are included under the topic Early Martinsdil Notables in all our PDF Extended History products and printed products wherever possible.

Migration of the Martinsdil family

At this time, the shores of the New World beckoned many English families that felt that the social climate in England was oppressive and lacked opportunity for change. Thousands left England at great expense in ships that were overcrowded and full of disease. A great portion of these settlers never survived the journey and even a greater number arrived sick, starving, and without a penny. The survivors, however, were often greeted with greater opportunity than they could have experienced back home. These English settlers made significant contributions to those colonies that would eventually become the United States and Canada. An examination of early immigration records and passenger ship lists revealed that people bearing the name Martinsdil arrived in North America very early: Edward and Margaret (sometimes spelled Martindell) Martindale who arrived in Pennsylvania in 1682; John Martindale arrived in New York State in 1758; Thomas Martindale arrived in New York in 1820.