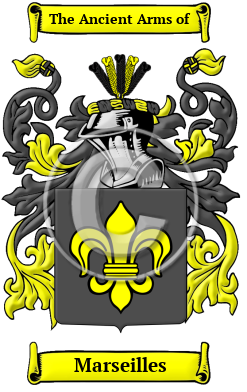 Early Origins of the Marseilles family

The surname Marseilles was first found in Poitou, where the family has held a family seat since very early times.

By the 11th century, members of this ancient family were well established in the region of the Poitou and some members served the community with distinction in which they lived and were rewarded with lands, titles, and letters patent confirming their nobility. This family has been cited with a chivalrous house since 1052. Alfred, Lord of Marsay, was awarded this title in recognition of his noteworthy services to the King and country. Playing an important role in the services of the King, Noble Thomas was made Knight of Marçay, and Etienne de Marsay was the Governor of the Town and of the Palace of Chinon in 1167 and became the Sénéchal of Touraine and of Anjou in 1190. [1]

Early History of the Marseilles family

This web page shows only a small excerpt of our Marseilles research. Another 206 words (15 lines of text) covering the years 1167, 1715, and 1825 are included under the topic Early Marseilles History in all our PDF Extended History products and printed products wherever possible.

Another 45 words (3 lines of text) are included under the topic Early Marseilles Notables in all our PDF Extended History products and printed products wherever possible.

Migration of the Marseilles family

Some of the first settlers of this family name or some of its variants were: Thomas Marsey who settled in Philadelphia, Pennsylvania, in 1683; and Nathaniel Marscey settled in Virginia in 1729.