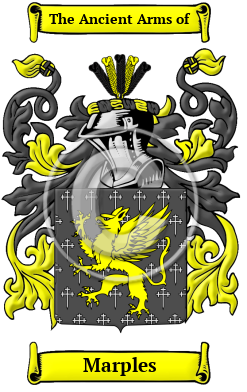 The name Marples was brought to England in the wave of migration that followed the Norman Conquest of 1066. The Marples family lived in Cheshire, at the manor of Marple which dates back to the 13th century when it was then known as Merpille and literally meant "pool or stream at the boundary," having derived from the Old English "maere" + "pyll." [1]

Early Origins of the Marples family

The surname Marples was first found in Cheshire where they held a family seat as Lords of the Manor of Marple, more anciently spelt Merpul. The first record of ownership of the estates was when Randle, Earl of Chester granted the manorial rights to Robert of Stockport. This is most likely the earliest scion of the Marple family name. He sold the estate to Sir George Vernon, known as 'The King of the Peak' Chief of one those rugged east Cheshire families who controlled the forests of Cheshire and Derbyshire. Marple Hall remains, and in the 19th century was the seat of the notable Isherwood family, having previously been the seat of the Bradshaws.

Early History of the Marples family

This web page shows only a small excerpt of our Marples research. Another 50 words (4 lines of text) covering the years 192 and 1921 are included under the topic Early Marples History in all our PDF Extended History products and printed products wherever possible.

More information is included under the topic Early Marples Notables in all our PDF Extended History products and printed products wherever possible.

Marples migration to the United States +

Marples Settlers in United States in the 19th Century