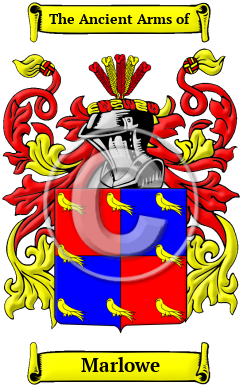 The surname Marlowe is a habitational place-name, which is a type of hereditary surname, and is derived from the name of the place in which the first bearer lived. Marlowe is derived from is Morlaix, in Brittany, a peninsula in the northwest of France. Formerly known as Armorica, a possession of the Roman Empire, this land consists of a plateau with a deeply indented coast and is broken by hills in the west.

Early Origins of the Marlowe family

The surname Marlowe was first found in Buckinghamshire at Marlow, a town and civil parish within Wycombe district. The earliest record of the place was listed as Merelafan in 1015, but was listed a few years later as Merlaue in the Domesday Book [1]. Literally, the name means 'land remaining after the draining of a pool' having been derived from the Old English words mere + laf [2] However, another reference claims the ancient name of this place was Merlaw, supposed to be derived from the Saxon word Mere, meaning a marsh, and Law or Low, meaning a hill. Marlow, historically called Great Marlow, first sent representatives to parliament in the 28th of Edward I., and continued so to do till the 2nd of Edward II. Little Marlow is a parish in the borough of Marlow about 1 1/2 miles from Marlow and as the name would imply has historically been much smaller.

Early History of the Marlowe family

This web page shows only a small excerpt of our Marlowe research. Another 128 words (9 lines of text) covering the years 1132, 1409 and 1564 are included under the topic Early Marlowe History in all our PDF Extended History products and printed products wherever possible.

Spelling variations of this family name include: Marlowe, Marloe, Marleau, Marlow and others.

Another 43 words (3 lines of text) are included under the topic Early Marlowe Notables in all our PDF Extended History products and printed products wherever possible.

In the United States, the name Marlowe is the 3,948th most popular surname with an estimated 7,461 people with that name. [3]

Migration of the Marlowe family to Ireland

Some of the Marlowe family moved to Ireland, but this topic is not covered in this excerpt.
Another 78 words (6 lines of text) about their life in Ireland is included in all our PDF Extended History products and printed products wherever possible.

Marlowe migration to the United States +

Marlowe Settlers in United States in the 17th Century