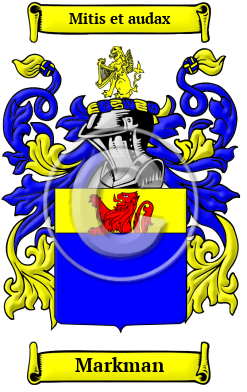 Early Origins of the Markman family

The surname Markman was first found in Nottinghamshire at Markham, near Tuxford, a parish where they family can be traced to the time of Henry II. [1] More recently the parish is known as East Markham and Great Markham. The St. John the Baptist church in East Markham "is a large structure, with a lofty embattled tower, and contains several ancient monuments to the Markham, Cressy, and other families." [2]

Early History of the Markman family

Distinguished members of the family include Sir John Markham, eminent lawyer in the year 1250; Sir John Markham (died 1479) was an English judge and Chief Justice of the King's Bench; Sir Robert Markham, 1st Baronet (1644-1690), an English politician, Member of Parliament for Grantham (1678-1679) and Newark in 1678; and Gervase Markham (ca. 1568-1637), an English poet and writer, best known for his work "The English Huswife, Containing the Inward and Outward Virtues Which Ought to Be in a Complete Woman" first published...
Another 83 words (6 lines of text) are included under the topic Early Markman Notables in all our PDF Extended History products and printed products wherever possible.

Migration of the Markman family to Ireland

Some of the Markman family moved to Ireland, but this topic is not covered in this excerpt.
Another 40 words (3 lines of text) about their life in Ireland is included in all our PDF Extended History products and printed products wherever possible.

Markman migration to the United States +

Markman Settlers in United States in the 19th Century

Markman Settlers in New Zealand in the 19th Century