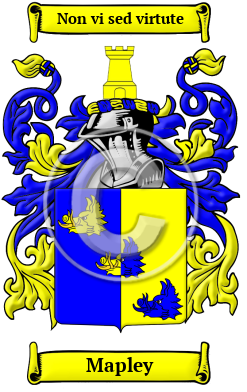 Early Origins of the Mapley family

The surname Mapley was first found in Essex, where the first record found was that of Robert atte Mapele who was listed here in the Assize Rolls of 1285. Later John Mapel was recorded in the Subsidy Rolls for Cambridgeshire in 1327 and John del Mapples was found in Sheffield in 1348. [1]

Another source claims the name is from "Mepal; a location name in Cambridgeshire." [4] This parish, in the hundred of South Witchford, union and Isle of Ely [5] has a very different etymology. It dates back to the 12th century when it was known as Mepahala and literally meant "nook of land of a man called Meapa," from the Old English personal name + "ham." [6] The aforementioned Cambridgeshire rolls entry in 1327 with the spelling of "Mapel" may be related.

Early History of the Mapley family

This web page shows only a small excerpt of our Mapley research. Another 53 words (4 lines of text) covering the years 1285, 1327, 1348, 1635 and 1655 are included under the topic Early Mapley History in all our PDF Extended History products and printed products wherever possible.

Spelling variations of this family name include: Maples, Mapel, Mapples, Maiples, Marples, Mapele and many more.

Another 32 words (2 lines of text) are included under the topic Early Mapley Notables in all our PDF Extended History products and printed products wherever possible.

Migration of the Mapley family