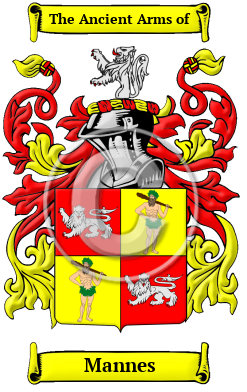 The distinguished Austrian surname Mannes is a proud sign of a rich and ancient ancestry. Austria, which was originally home to a Celtic people, was conquered by the Roman Empire in about 15 BC. Following the fall of Rome, Austria was repeatedly invaded by barbarian tribes, such as the Vandals, Visigoths, and Huns, who swept in from the east. During the 5th and 6th centuries, the Alemanni, Avars and Slavs settled Austria. The Avars were defeated in 785 by the Frankish emperor Charlemagne, who set up the East Mark, which later became known as the Österreich. Austria was ruled by the Babenburger dynasty until 1278, when they were succeeded by the Hapsburg dynasty, which ruled Austria until the 20th century.

Early Origins of the Mannes family

The surname Mannes was first found in Styria, where the name could be considered to have made a great early contribution to the feudal society which became the backbone of modern Europe. The name became prominent in local affairs and branched into many houses. They played important roles in the tribal and national conflicts in which each group sought power and status in an ever changing territorial profile.

Early History of the Mannes family

Many cultural groups lived in the German states in medieval times. Each had its own dialect and traditions, and unique variations of popular names. Low German, which is similar to contemporary Dutch, was spoken in Westphalia. German names are characterized by additions such as regional suffixes and phrases that tell something about the origin or background of its original bearer. Further contributing to the variation in German names was the fact that there were no spelling rules in medieval times: scribes recorded names according to their sound. The recorded spelling variations of Mannes include Man, Manne, Manner, Maner, Maenner, Maener, Manns and others.

During this period prominent bearers of the name Mannes were Horace Mann (1796-1859), who was an American educator and statesman. His writings, which influenced the secularization of public schools, hold a commanding...
Another 32 words (2 lines of text) are included under the topic Early Mannes Notables in all our PDF Extended History products and printed products wherever possible.

Migration of the Mannes family

After the First World War, Austria became a republic. The Treaty of Versailles broke up the empire in 1919 and many of the Sudeten Germans were incorporated into the new nation of Czechoslovakia. In the 20th century, many Austrians migrated to other parts of Germany or Europe, as well as to North America. In the United States, the majority of settlers landed in Philadelphia, and moved on to Ohio, Texas, Illinois, California, New York, and Maryland. Many German settlers also migrated to Canada, particularly Ontario and the Prairies. Amongst the settlers in North America with this distinguished name Mannes were Percivall Mann, who came to Virginia in 1623. Nicholas Mann came to Virginia in 1642; while Katherine Mann came there in 1663; and Thomas Mann arrived in 1635. Daniell Mann and John Mann came to Boston in 1652. Throughout the 1730s and 1740s, many bearers of this name came to Philadelphia, such as Johannes Mann with his wife Margareta and their two children. In the 1840s and 1850s, many members of the family emigrated to Texas, such as Christian Mann in 1846.