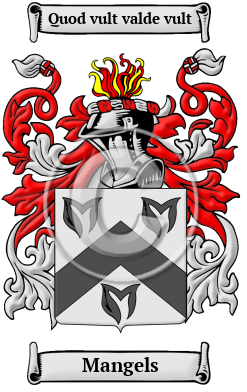 Early Origins of the Mangels family

The surname Mangels was first found in Kelso, Scotland where "this name first appears in connection with the Abbey of Kelso and shortly afterwards with the Abbey of Arbroath. About 1180 Andrew Maunsel or Mansel witnessed a charter of the church of Pencathlan to Kelso. Willelmus Manselmus witnessed William de Moreuille's charter of Gillemoristun to Edulfus filius Uctredi before 1196."

"Between 1198 and 1222 we find Andrew Maunsel witnessing charters by William de Veteri Ponte and Bernard de Haudene in favor of Kelso Abbey and also witnessing the charter of the church of Brennath (Birnie in Moray) to the same abbey. About 1200 he granted liberty to the Abbey of Kelso to build a weir upon part of his ground 'in le halech ex orientali parte ville de Roxbergh'" [1]

Early History of the Mangels family

This web page shows only a small excerpt of our Mangels research. Another 126 words (9 lines of text) covering the years 119 and 1198 are included under the topic Early Mangels History in all our PDF Extended History products and printed products wherever possible.

Spelling variations of this family name include: Mansell, Mansel, Mancell, Mauncell and others.

More information is included under the topic Early Mangels Notables in all our PDF Extended History products and printed products wherever possible.

In the United States, the name Mangels is the 17,252nd most popular surname with an estimated 2,487 people with that name. [2]

Mangels migration to the United States +

Mangels Settlers in United States in the 19th Century