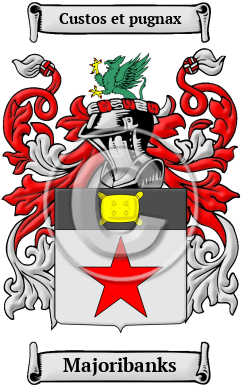 Early Origins of the Majoribanks family

The surname Majoribanks was first found in Renfrewshire in the lands of Ratho-Marjori, "so named from their having been bestowed on the Princess Marjorie, daughter of Robert the Bruce, on her marriage in 1316 with Walter the High Steward. The lands subsequently called 'terre de Ratho-Marjoribankis' came into possession of a family of the name of Johnston, who from them assumed the name of Marjoribanks, though they continued to bear in part the Johnston arms. Also said to be from barony of same name which formerly comprised the greater part of the eastern division of West Calder parish. Also from their lands in Dumfriesshire. " [1]

Early History of the Majoribanks family

This web page shows only a small excerpt of our Majoribanks research. Another 127 words (9 lines of text) covering the years 1316, 1554 and 1554 are included under the topic Early Majoribanks History in all our PDF Extended History products and printed products wherever possible.

More information is included under the topic Early Majoribanks Notables in all our PDF Extended History products and printed products wherever possible.

Majoribanks migration to the United States +

Majoribanks Settlers in United States in the 18th Century

Majoribanks Settlers in New Zealand in the 19th Century