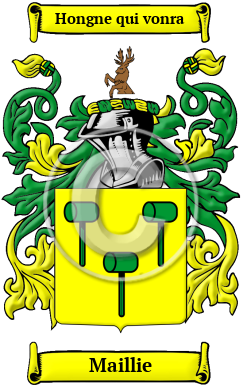 Early Origins of the Maillie family

The surname Maillie was first found in Burgundy (French: Bourgogne), an administrative and historical region of east-central France, where this noted family has held a family seat since ancient times. One of the earliest records of the family was Blessed Jeanne-Marie de Maille (1331-1414), a French Roman Catholic and a member from the Third Order of Saint Francis. Pope Pius IX confirmed her beatification on 27 April 1871.

Early History of the Maillie family

Notable amongst the family at this time was Jeanne-Marie de Maille (1331-1414), a French saint; and François de Mailly (1658-1721), a French archbishop and Cardinal, Archbishop of Arles from 1697, then Archbishop of Reims from 1710. Benoît de Maillet (1656-1738) was a French diplomat and natural historian from Lorraine. He was French consul general at...
Another 53 words (4 lines of text) are included under the topic Early Maillie Notables in all our PDF Extended History products and printed products wherever possible.

Maillie migration to the United States +

Maillie Settlers in United States in the 19th Century