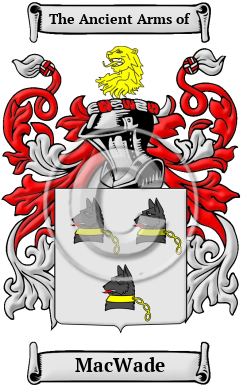 The original Gaelic form of MacWade was Mac Uaid, which means son of Wat.

Early Origins of the MacWade family

The surname MacWade was first found in County Monaghan (Irish: Muineachán) located in the Northern part of the Republic of Ireland in the province of Ulster.

Early History of the MacWade family

This web page shows only a small excerpt of our MacWade research. Another 65 words (5 lines of text) covering the years 175 and 1750 are included under the topic Early MacWade History in all our PDF Extended History products and printed products wherever possible.

The archives that survive today demonstrate the difficulty experienced by the scribes of this period in their attempts to record these names in writing. Spelling variations of the name MacWade dating from that time include McQuaid, McQuade, McWade, McQuid, McQuoid, McQuaide and many more.

More information is included under the topic Early MacWade Notables in all our PDF Extended History products and printed products wherever possible.

MacWade Settlers in Australia in the 19th Century