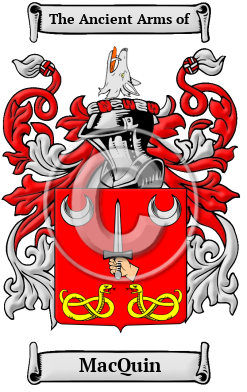 The Irish name MacQuin was originally written in a Gaelic form as O Cuinn, which means descendant of Conn.

Early Origins of the MacQuin family

The surname MacQuin was first found in County Longford (Irish: An Longfort) traditionally known as Annaly or Teffia, and situated in the Irish Midlands, in Northwest Leinster.

Early History of the MacQuin family

Another 45 words (3 lines of text) are included under the topic Early MacQuin Notables in all our PDF Extended History products and printed products wherever possible.

MacQuin Settlers in Australia in the 19th Century

MacQuin Settlers in West Indies in the 17th Century