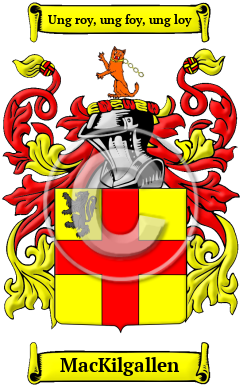 The surname MacKilgallen comes from the Irish name Mac Giolla Chaillin, meaning the son of a servant or devotee of St. Caillin.

Early Origins of the MacKilgallen family

The surname MacKilgallen was first found in Connacht (Irish: Connachta, (land of the) descendants of Conn), but there is a Kilcullen in County Kildare, formerly the site of a walled town, and before that of an ecclesiastical settlement dating from the 5th century. Old Kilcullen is the still the site of a round tower and a decorated High Cross. Kilcullen begun as a monastic settlement, in the period around 448.

Early History of the MacKilgallen family

This web page shows only a small excerpt of our MacKilgallen research. More information is included under the topic Early MacKilgallen History in all our PDF Extended History products and printed products wherever possible.

Spelling variations of this family name include: Kilgallen, MacKilgallen, Kilcullen, Kilgallon and others.

More information is included under the topic Early MacKilgallen Notables in all our PDF Extended History products and printed products wherever possible.

Migration of the MacKilgallen family

Some of the first settlers of this family name or some of its variants were: Catharine Kilgallan, who arrived in Newport, Rhode Island in 1811; Michael Kilgallin, who landed in Quebec in 1825; John and Mary Kilgallon, who immigrated to St. John, New Brunswick between 1843 and 1848.