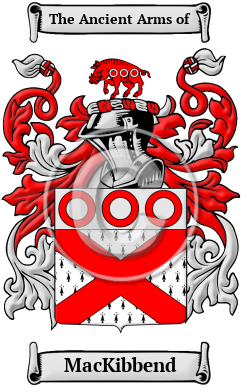 Early Origins of the MacKibbend family

The surname MacKibbend was first found in counties of Mayo and Limerick, where two distinct families arose shortly after Strongbow invasion of Ireland in 1172. The majority of the family hails from Mayo and were a branch of the great Burke family.

Early History of the MacKibbend family

During an investigation of the origin of each name, it was found that church officials and medieval scribes spelled many surnames as they sounded. Therefore, during the lifetime of a single person, a name could be spelt numerous ways. Some of the spelling variations for the name MacKibbend include Fitzgibbon, Fitzgibbons, MacGibbon, Gibbon, Gibbons, Gibben, Gibbens, Gibbin, Gibbins and many more.

Migration of the MacKibbend family

Ireland experienced a dramatic decrease in its population during the 19th century. This was in a great measure, a response to England's imperialistic policies. Hunger and disease took the lives of many Irish people and many more chose to leave their homeland to escape the horrific conditions. North America with its promise of work, freedom, and land was an extremely popular destination for Irish families. For those families that survived the journey, all three of these things were often attained through much hard work and perseverance. Research into early immigration and passenger lists revealed many immigrants bearing the name MacKibbend: Daniel, George, John, Michael, James, Nicholas, and Patrick Fitzgibbon who all arrived in Philadelphia between 1840 and 1865; Ann Gibbon settled in Virginia in 1660.