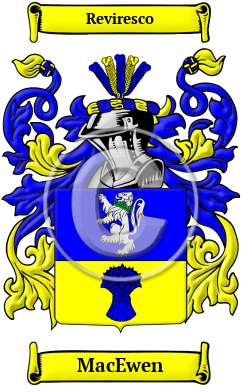 The ancestors of the MacEwen family come from the ancient Scottish kingdom of Dalriada. The family name comes from the personal name Ewen. The Gaelic form of the name was Mac Eoghainn.

Early Origins of the MacEwen family

The surname MacEwen was first found in Argyllshire (Gaelic erra Ghaidheal), the region of western Scotland corresponding roughly with the ancient Kingdom of Dál Riata, in the Strathclyde region of Scotland, now part of the Council Area of Argyll and Bute, where they were first found in the barony of Otter, on the shores of Loch Fyne. The eponymous ancestor of the Clan is reputed to be Eoghain na h-Oitrich, also known as 'Ewen of Otter', who lived at the beginning of the 12th century. Clear records of the Clan were found in 1219, when Gilpatrik Mac Ewen measured the borders of his lands in Kynblathmund.

Early History of the MacEwen family

This web page shows only a small excerpt of our MacEwen research. Another 123 words (9 lines of text) covering the years 1174 and 1219 are included under the topic Early MacEwen History in all our PDF Extended History products and printed products wherever possible.

Historical recordings of the name MacEwen include many spelling variations. They are the result of repeated translations of the name from Gaelic to English and inconsistencies in spelling rules. They include MacEwen, MacEwan, MacEwing, MacEuen, MacKewin, MacKewan, MacEòghainn (Gaelic) and many more.

More information is included under the topic Early MacEwen Notables in all our PDF Extended History products and printed products wherever possible.

MacEwen migration to the United States +

Dalriadan families proliferated in North America. Their descendants still populate many communities in the eastern parts of both the United States and Canada. Some settled in Canada as United Empire Loyalists, in the wake of the American War of Independence. Families on both sides of the border have recovered much of their heritage in the 20th century through Clan societies and highland games. Analysis of immigration records indicates that some of the first North American immigrants bore the name MacEwen or a variant listed above:

MacEwen Settlers in United States in the 19th Century