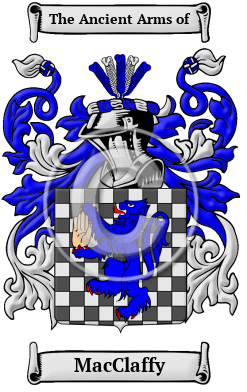 The surname MacClaffy comes from the Irish name Mac Laithimh, from "flaitheamh" meaning "ruler." In Ulster the name is anglicized as MacClave and MacLave. In County Monaghan, however, the name is frequently mistranslated as Hand, since the name is phonetically similar to another Gaelic word "lamh" for "hand." Claffey is the most common variant in the midlands of Ireland. [1]

Early Origins of the MacClaffy family

The surname MacClaffy was first found in Ulster (Irish: Ulaidh).

Early History of the MacClaffy family

This web page shows only a small excerpt of our MacClaffy research. More information is included under the topic Early MacClaffy History in all our PDF Extended History products and printed products wherever possible.

More information is included under the topic Early MacClaffy Notables in all our PDF Extended History products and printed products wherever possible.

Migration of the MacClaffy family

Some of the first settlers of this family name or some of its variants were: Peter Claffey, who settled in New York in 1841; and Michael Claffey, who was registered in Sacramento County, California in 1868. John and Thomas Claffey were naturalized in Washington County, Pennsylvania in 1840.