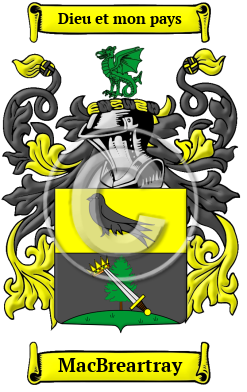 The first family to use the name MacBreartray lived in the area that was once the ancient Scottish kingdom of Dalriada. It is a name for a noted mariner or a sea captain. [1]

Early Origins of the MacBreartray family

The surname MacBreartray was first found in the islands of Arran and Bute. Early records for the family are scarce. "In 1506 Gilcrist Makwrerdy held the lands of Bransar in Bute, and Finlay Makvreirdy had sasine of Brothok there in the same year. Donald Makwrarty of Birgadulknok appears in 1534; several M'Urartys appear as witnesses in Bute in 1540; and Sir James M'Wartye, a Pope's knight, appears as vicar of Kingarth in Bute, 1554 and 1556. James Makilveritie, chaplain in the chapel of S. Michael the Archangel in Rothesay Castle, between 1590-1600, appears in the Exchequer Rolls as McQuhirertie, McQuhirirtie, McQuheritie (these three spellings in 1596), McIliquharartie (1598), and Makquhirrirtie (1600). " [2]

Early History of the MacBreartray family

Translation in medieval times was an undeveloped science and was often carried out without due care. For this reason, many early Scottish names appeared radically altered when written in English. The spelling variations of MacBreartray include MacCurdy, MacKirdy, MacKirdie, MacCurdie, MacQuartie, MacBararthy, MacBerarthy, MacWerarthy, MacMurtrie, MacMutrie and many more.

Another 47 words (3 lines of text) are included under the topic Early MacBreartray Notables in all our PDF Extended History products and printed products wherever possible.

Migration of the MacBreartray family to Ireland

Some of the MacBreartray family moved to Ireland, but this topic is not covered in this excerpt.
Another 147 words (10 lines of text) about their life in Ireland is included in all our PDF Extended History products and printed products wherever possible.

Migration of the MacBreartray family

Many settled along the east coast of what would become the United States and Canada. As the American War of Independence broke out, those who remained loyal to the crown went north to Canada as United Empire Loyalists. The ancestors of all of these hardy Dalriadan-Scottish settlers began to recover their collective history in the 20th century with the advent of the vibrant culture fostered by highland games and Clan societies in North America. Highland games, clan societies, and other organizations generated much renewed interest in Scottish heritage in the 20th century. The MacBreartray were among the earliest of the Scottish settlers as immigration passenger lists have shown: James McCurdy, and his wife Elizabeth Ayers, who were recorded as Scotch-Irish living in New Hampshire in 1730; Archibald Mccurdy, who arrived in New England in 1737 with his five children, John McCurdy, who arrived in New England in 1745.