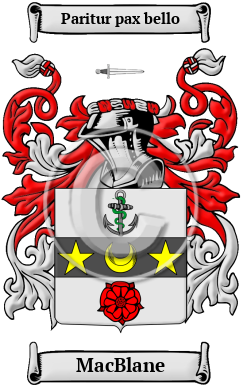 The story of the name MacBlane is long and rich in history. It begins among the Boernicians of the Scottish/English Borderlands, where the name was derived from the Gaelic personal name Bleen, which means yellow. It was also the name of an early Celtic saint.

Early Origins of the MacBlane family

The surname MacBlane was first found in Ayrshire (Gaelic: Siorrachd Inbhir Àir), formerly a county in the southwestern Strathclyde region of Scotland, that today makes up the Council Areas of South, East, and North Ayrshire, where they held a family seat from very ancient times, some say well before the Norman Conquest and the arrival of Duke William at Hastings in 1066 A.D.

Early History of the MacBlane family

This web page shows only a small excerpt of our MacBlane research. Another 104 words (7 lines of text) covering the years 1561, 1660, and 1674 are included under the topic Early MacBlane History in all our PDF Extended History products and printed products wherever possible.

In the Middles Ages scribes spelled names by their sound. Often a name was written under a different spelling variation each time it was recorded. MacBlane has appeared as Blain, Blane, Blaine, Blaines, Blahan and others.

More information is included under the topic Early MacBlane Notables in all our PDF Extended History products and printed products wherever possible.

Migration of the MacBlane family to Ireland

Some of the MacBlane family moved to Ireland, but this topic is not covered in this excerpt.
Another 60 words (4 lines of text) about their life in Ireland is included in all our PDF Extended History products and printed products wherever possible.

Migration of the MacBlane family

The ancestors of Boernician-Scottish settlers dot North America even today. They settled all along the east coast when they came over, but some went north as United Empire Loyalists at the time of the War of Independence. However, these strong lines endured as Scottish families in the United States and Canada have rediscovered much of the heritage that was taken from them centuries ago. Some of the first immigrants to cross the Atlantic and come to North America carried the name MacBlane, or a variant listed above: James Blaine who settled in Pennsylvania in 1740; Eliza Blain who settled in New York in 1774; Peter Blain settled in Philadelphia in 1805; John Blain settled in New Orleans in 1820.