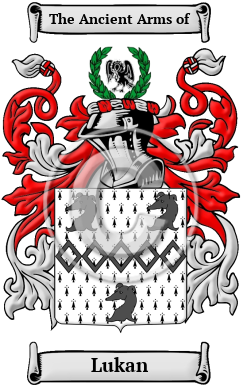 Early Origins of the Lukan family

The surname Lukan was first found in Berwickshire where the this surname is derived from the name of an ancestor as in 'the son of Luke,' which is popularly Luck and Luckie on the Scottish border. [1]

Early History of the Lukan family

This web page shows only a small excerpt of our Lukan research. Another 115 words (8 lines of text) covering the years 1600, 1567, 1582, 1691, 1580, 1647 and are included under the topic Early Lukan History in all our PDF Extended History products and printed products wherever possible.

More information is included under the topic Early Lukan Notables in all our PDF Extended History products and printed products wherever possible.

Migration of the Lukan family to Ireland

Some of the Lukan family moved to Ireland, but this topic is not covered in this excerpt.
Another 59 words (4 lines of text) about their life in Ireland is included in all our PDF Extended History products and printed products wherever possible.

Migration of the Lukan family

Some of the first settlers of this family name or some of its variants were: Robert Luck, who settled in Virginia in 1634; along with William; Edward Luck settled in Maryland in 1775; Jacob Luke settled in Boston in 1762; Elias Luke settled in Barbados with his servants in 1679. Phillip Loucks settled in New England in 1709.