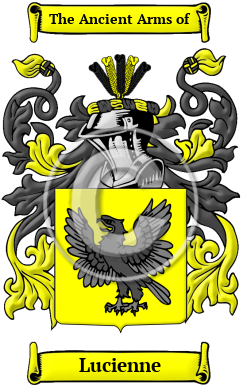 Early Origins of the Lucienne family

The surname Lucienne was first found in the region of Marne in the northern province of Champagne. However, as the surname is derived from a personal name, it was common throughout most of France.

Early History of the Lucienne family

This web page shows only a small excerpt of our Lucienne research. Another 104 words (7 lines of text) are included under the topic Early Lucienne History in all our PDF Extended History products and printed products wherever possible.

Spelling variations of this family name include: Lucien, Lucian, Luciano, Luciani, Lucienne and many more.

Notable amongst the family during this period was the prefect of Egypt, at the height of the Roman Empire, whose name was simply Lucien. He was born in Samosate during...
Another 29 words (2 lines of text) are included under the topic Early Lucienne Notables in all our PDF Extended History products and printed products wherever possible.

Migration of the Lucienne family

Some of the first settlers of this family name or some of its variants were: Jacques Lucien who arrived in Louisiana in 1769; Henry Lucien who settled in Pennsylvania in 1869; and Azuio Lucienne who settled in New York City in 1896..