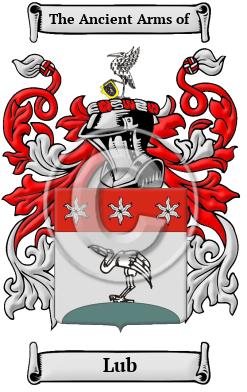 Early Origins of the Lub family

The surname Lub was first found in Lincolnshire where Robert de Lubyck was the first on record in the Hundredorum Rolls of 1272. The same rolls included Bernard de Lubic in Yorkshire. [1] [2]

However, we must look to Norfolk for most of the family's records and their rise to power. Here we found Hellbrand de Lubeck recorded there 14 Edward I (during the fourteenth year of King Edward I's reign.) [3]

Later Richard Lubbock was Sheriff of Norwich in 1714 and William Lubbock was Rector of Lamms in 1738. [3]

The market-town and parish of North Walsham was home to the clothier John Lubbock (1669-1731), the progenitor of the famous Lubbocks which includes six barons, an American Texas Ranger, two famous muscians and at least three famous cricketers. "In the year 1600, nearly the whole of this town was destroyed by a fire, which, although it continued but three hours, consumed property of the value of £20,000." [4]

Early History of the Lub family

Spelling variations of this family name include: Lubbock, Lubeck, Lubbeck, Lub and others.

Another 45 words (3 lines of text) are included under the topic Early Lub Notables in all our PDF Extended History products and printed products wherever possible.

Lub migration to the United States +

Lub Settlers in United States in the 19th Century