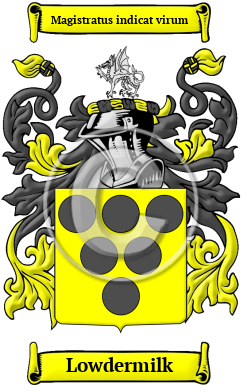 The name Lowdermilk reached England in the great wave of migration following the Norman Conquest of 1066. The Lowdermilk family lived in Lowther, now in the civil parish in Eden District, Cumbria. Historically in Westmorland, Lowther was first recorded as Lauder c. 1175 and it thought to have been named from the River Lowther. [1] "It formerly contained a village of the same name, which was demolished in 1682, by Sir John Lowther, who soon afterwards built another, called New-town, where carpet and linen manufactories were established." [2] "Lowther Castle, the residence of the family of that name, stands majestically in a park of 600 acres, and combines the grand effect of a fortification with the splendour of a palace; the fabric is modern, having been commenced in 1802, upon the site of the ancient Hall, which was nearly destroyed by fire in 1720. " [2]

Early Origins of the Lowdermilk family

The surname Lowdermilk was first found in Westmorland, an area in the North East of England (now part of Cumbria,) where the family is "eminently a knightly family, traced by Brydges to Sir Gervase de Lowther, living in the reign of Henry III. Other authorities make Sir Hugh de Lowther, knight for this county, in the 28th of Edward I., as the first recorded ancestor; his great-grandson was at Agincourt in 1415." [3]

Lowther is a parish in Westmorland. "It formerly contained a village of the same name, which was demolished in 1682, by Sir John Lowther, who soon afterwards built another, called New-town." [2]

Early History of the Lowdermilk family

Before the advent of the printing press and the first dictionaries, the English language was not standardized. Sound was what guided spelling in the Middle Ages, so one person's name was often recorded under several variations during a single lifetime. Spelling variations were common, even among the names of the most literate people. Known variations of the Lowdermilk family name include Lowther, Louder, Lowder, Louther and others.

Outstanding amongst the family at this time was Sir Richard Lowther of Lowther, High Sheriff of Cumberland in 1588; Gerard Lowther of Penrith, High Sheriff of Cumberland in 1593; Sir John Lowther of Lowther Hall; Richard Lowther (ca. 1583-1659), an English lawyer and politician, Member of Parliament for Berwick-upon-Tweed 1626, Member of Parliament for Appleby 1640; Sir John Lowther, 1st Baronet (1605-1675), an English lawyer, landowner, and politician who sat in the House of Commons...
Another 75 words (5 lines of text) are included under the topic Early Lowdermilk Notables in all our PDF Extended History products and printed products wherever possible.

Migration of the Lowdermilk family to Ireland

Some of the Lowdermilk family moved to Ireland, but this topic is not covered in this excerpt.
Another 68 words (5 lines of text) about their life in Ireland is included in all our PDF Extended History products and printed products wherever possible.

Migration of the Lowdermilk family

To escape the political and religious chaos of this era, thousands of English families began to migrate to the New World in search of land and freedom from religious and political persecution. The passage was expensive and the ships were dark, crowded, and unsafe; however, those who made the voyage safely were encountered opportunities that were not available to them in their homeland. Many of the families that reached the New World at this time went on to make important contributions to the emerging nations of the United States and Canada. Research into various historical records has revealed some of first members of the Lowdermilk family to immigrate North America: Luke Lowther settled in Barbados in 1679; William Lowther settled in Virginia in 1635; Thomas Lowther settled in Jamaica in 1679; Joseph Lowther settled in New York in 1804..