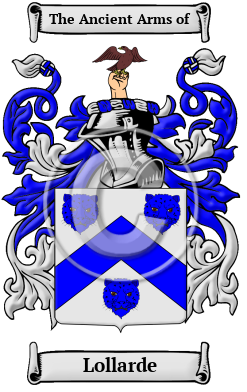 The origins of the distinguished surname Lollarde are somewhat obscure. The name is most likely related to the Middle Dutch word "lollaerd," meaning "babbler of nonsense"; alternatively, it is possible that the name is connected to the early Middle English word "lollere," meaning "mumbler," a name applied to a pious person. "Lollarde" was substituted in the 14th century for "Lollard" as a description of the followers of John Wyclif, an English Bible translator who was condemned as a heretic. [1]

Early Origins of the Lollarde family

The surname Lollarde was first found in East England, where the name is thought to have originated. The first known bearer of the name was Elfred le Lollere, who was recorded in the Cartularium Monasterii de Rameseia of Huntingdonshire in 1133. [1]

Early History of the Lollarde family

This web page shows only a small excerpt of our Lollarde research. Another 98 words (7 lines of text) covering the years 1133, 1279, 1821, 1827, 1322, 1808 and 1790 are included under the topic Early Lollarde History in all our PDF Extended History products and printed products wherever possible.

Spelling variations of this family name include: Lollar, Loller, Lawler, Lawlor, Lawlar, Lollard and many more.

Another 32 words (2 lines of text) are included under the topic Early Lollarde Notables in all our PDF Extended History products and printed products wherever possible.

Migration of the Lollarde family to Ireland

Some of the Lollarde family moved to Ireland, but this topic is not covered in this excerpt.
Another 41 words (3 lines of text) about their life in Ireland is included in all our PDF Extended History products and printed products wherever possible.

Migration of the Lollarde family

Some of the first settlers of this family name or some of its variants were: Barnard Lollard, who came to Maryland in 1739; Edward Loller, who was listed as a runaway convict, servant, or apprentice in Lancaster, Pennsylvania in 1747.