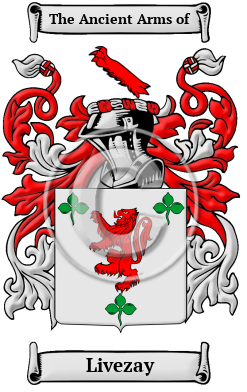 Of all the Anglo-Saxon names to come from Britain, Livezay is one of the most ancient. The name is a result of the original family having lived in the township of Livesey which was in the parish of Blackburn in the county of Lancashire. The Livezay surname is a Habitation name that was originally derived from the place-names of pre-existing towns, villages, parishes, or farmsteads.

Early Origins of the Livezay family

The surname Livezay was first found in Lancashire at Livesey, a township, in the parish, union, and Lower division of the hundred of Blackburn. "This place gave name to a family who resided here, and were owners of the greater part of the township. James Levesey, in the reign of Edward VI. held the estate as a manor, as did his descendant, James Levesey, in the 9th of James I." [1]

Early History of the Livezay family

This web page shows only a small excerpt of our Livezay research. Another 72 words (5 lines of text) are included under the topic Early Livezay History in all our PDF Extended History products and printed products wherever possible.

The first dictionaries that appeared in the last few hundred years did much to standardize the English language. Before that time, spelling variations in names were a common occurrence. The language was changing, incorporating pieces of other languages, and the spelling of names changed with it. Livezay has been spelled many different ways, including Livesey, Liversay, Liversey, Livezey and others.

More information is included under the topic Early Livezay Notables in all our PDF Extended History products and printed products wherever possible.

Migration of the Livezay family