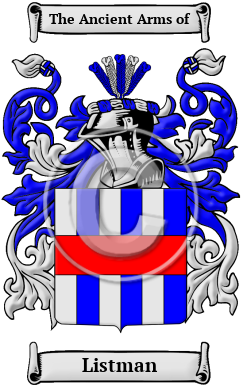 A multitude of prestigious family names, such as the surname Listman, were formed in the lands which became the modern state of Silesia. In the medieval era, Germany was fragmented and inhabited by numerous Barbarian tribes, who fought amongst themselves for control of the land. The ancient dukedom of Silesia derived its name from the Germanic tribe named the Silingers, who occupied Silesia between the 2nd and the 6th centuries.

Early Origins of the Listman family

The surname Listman was first found in Silesia and Lausitz, where the name emerged in mediaeval times as one of the notable families of the region. In Old-German "list" meant "cunning" or "artful," and chronicles first mention Heinrich list of Budweis in 1250, Cunad mit der Lyst in 1399, Benz Listli of Wuerttemberg in 1418, and Hans Listeman of Haldensleben around 1400. Liste is also a city near Hanover. From the 13th century the surname was identified with the great social and economic evolution which made this territory a landmark contributor to the development of the nation.

Early History of the Listman family

This web page shows only a small excerpt of our Listman research. Another 162 words (12 lines of text) covering the years 1299, 1700, 1808, 1818, 1789 and 1846 are included under the topic Early Listman History in all our PDF Extended History products and printed products wherever possible.

Notables of the period with the surname Listman were Friedrich List (1789-1846), a self-taught economist who became one of the greatest authorities of the 19th century on political economy. Franz...
Another 30 words (2 lines of text) are included under the topic Early Listman Notables in all our PDF Extended History products and printed products wherever possible.

Listman migration to the United States +

Listman Settlers in United States in the 19th Century