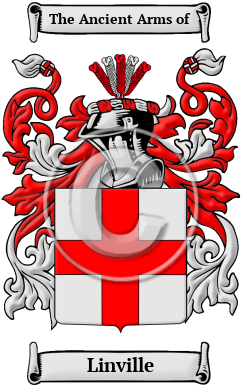 Early Origins of the Linville family

The surname Linville was first found in Buckinghamshire. They claim descent as a tenant of the lands of Lynford, held by Stanard, a Norman noble, from Roger Bigod who was recorded in the Domesday Book census of 1086. [1]

Early History of the Linville family

Outstanding amongst the family at this time was Thomas Lynford or Linford (1650-1724), English divine, son of Samuel Lynford of Cambridge, where he was born in 1650. He "was educated at Newark and Bury St. Edmunds, and admitted as a sizar at Christ's College, Cambridge, 16 July 1666. He is described in the admission book as ‘optimæ spei juvenis.’ He graduated B.A. in 1670-1671, and proceeded M.A. in 1674, and S.T.P. in 1689, being also incorporated M.A. of Oxford on 11 July 1676. He was elected fellow of Christ's in 1675, and was also tutor from 1676 to 1685. He gave...
Another 108 words (8 lines of text) are included under the topic Early Linville Notables in all our PDF Extended History products and printed products wherever possible.

In the United States, the name Linville is the 4,332nd most popular surname with an estimated 7,461 people with that name. [5]

Linville migration to the United States +

Linville Settlers in United States in the 18th Century

Linville Settlers in United States in the 20th Century

Suggested Readings for the name Linville +