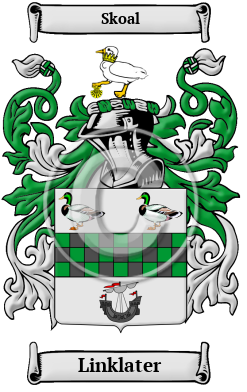 The Linklater surname was a habitation name, taken on from one of the places so named in the Orkneys. The place name derived from the Old Norse "lyng," meaning "heather," and "klettr," or "rock" which were combined to make the Old Norse name "Lynglettr."

Early Origins of the Linklater family

The surname Linklater was first found in the Orkneys, where the original form of the name was Linklet. Today, Linklet and Linklater both are located in the Orkney Islands. Linklater is located in South Ronaldsey, while Linklet is located in North Ronaldsey. Records of Linklater in South Ronaldsey date back as far as 1500 where it appears as Linclet; and Linklet in 1596. Linklater was also found in North Sandwick where it was listed as Lynkclet in 1500. Moving back to the Old Norse versions of the name we found records of Criste Aelingeklaet who was referred to in the Commons of Orkney in 1424 as a "goodman."

Early History of the Linklater family

This web page shows only a small excerpt of our Linklater research. Another 74 words (5 lines of text) covering the years 1678, 1687, 1625, 1678, 1757 and 1789 are included under the topic Early Linklater History in all our PDF Extended History products and printed products wherever possible.

Spelling variations of this family name include: Linklater, Linkletter, Linklitter, Linklet and others.

Notable amongst the Clan from early times was Andrew Linklater of that Ilk who was lawrikman in North Sandwick in 1678; and Peter Linklater (1757-1789), one of the quartermasters on the "Bounty" who remained loyal to Captain Bligh and was set adrift during the mutiny. During...
Another 45 words (3 lines of text) are included under the topic Early Linklater Notables in all our PDF Extended History products and printed products wherever possible.

Linklater migration to the United States +

Linklater Settlers in United States in the 19th Century

Linklater Settlers in United States in the 20th Century

Linklater Settlers in Canada in the 18th Century

Linklater Settlers in Canada in the 19th Century

Linklater Settlers in Australia in the 19th Century