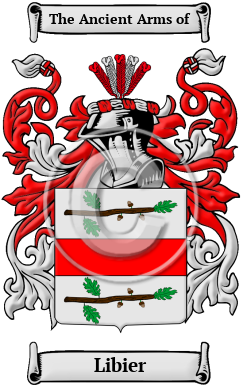 The first family to use the name Libier lived in that part northern and central Europe known today as Germany. It was used as a nickname for a person known as "flatterer" or "smooth talker" as it is in the case of Rudolph qui dicitur (so-named) Lieber who lived in the 13th century, or it could mean "one of pleasant disposition," as in Bernhard Lieb of Wuerttemberg in 1290.

Early Origins of the Libier family

The surname Libier was first found in Silesia, where the name came from humble beginnings but gained a significant reputation for its contribution to the emerging mediaeval society. The literal meaning of the name in its mediaeval context could either be "flatterer" or "smooth talker" as it is in the case of one Rudolph qui dicitur ("so-named") Lieber who lived in the 13th century, or it could mean "one of pleasant disposition," as in Bernhard Lieb of Wuerttemberg in 1290. The name became more prominent as many branches of the same house acquired distant estates and branches, some in foreign countries. They were always elevating their social status by their great contributions to society.

Early History of the Libier family

Spelling variations of this family name include: Lieb, Liebe, Lieber, Liber and others.

Notables of the period with the surname Libier were Christian Siegmund Liebe (1654-1708), a German composer from Freiberg, Saxony; and Francis Lieber (1800-1872), who was a German-American publicist, born in Berlin. He fought at Waterloo in 1815...
Another 37 words (3 lines of text) are included under the topic Early Libier Notables in all our PDF Extended History products and printed products wherever possible.

Migration of the Libier family

Some of the first settlers of this family name or some of its variants were: Elisabeth Lieber, who came to Carolina in 1743. William Lieber and Johann Wilhelm Lieber came to Philadelphia in 1754; while Valentin Lieber came to New York City in 1868. Johan Michel Lieb came to Philadelphia in 1750. He was followed by Charles Lieb in 1844 and Michael Lieb in 1860. Henriette Lieb came to Texas in 1850.