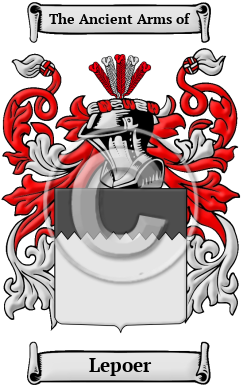 The surname Lepoer came from a nickname for a poor man or a pauper. This name implies a voluntary vow of poverty rather than involuntary destitution. The surname Lepoer is derived from the Old French word "povre," which comes from the Latin word "pauper," which means "poor." The Gaelic form of the surname is "de Paor," although the proper prefix would be "le."

Early Origins of the Lepoer family

The surname Lepoer was first found in Devon, where they were descended from Rivalon, Lord of Poncar, in Brittany. Bartholomew Poher was granted lands in Devon and was Lord of Blackborough and was father of Robert Poher (sometimes called Sir Roger or Robert le Poer) who accompanied Strongbow in the Irish invasion in 1172. They were granted the county of Waterford by Strongbow and became active in the Government of Waterford and the whole of Ireland. [1]

The original settler Robert was killed in 1188 but his many sons and grandchildren established a name which would eventually become as Irish as the native Irish. Another source provides more details: "The immediate descendant of Norman Le Poer, or Power, was Sir Roger Le Poer, Knt., who accompanied Strongbow to Ireland, and obtained for his services three considerable territorial grants. He was ancestor of the Lords de la Poer, now represented by the Marquess of Waterford, and the many eminent families of Power in the South of Ireland, the Powers of Clashmore, Faithlegg, Kilfane, Belleville, etc." [2]

"The name of Poer or Power is widely spread in Ireland. The Poers of Belleville Park, near Cappoquin ; the Powers of Affane and Mount Rivers, in the same vicinity ; the Powers of Gurteen, midway between Clonmel and Carrick, are the chief representatives of this honourable name in the county of Water­ford. Several branches remained seated in England. " [3]

Early History of the Lepoer family

This web page shows only a small excerpt of our Lepoer research. Another 66 words (5 lines of text) covering the years 1630, 1690, 1666, 1649, 1654 and 1660 are included under the topic Early Lepoer History in all our PDF Extended History products and printed products wherever possible.

Names were simply spelled as they sounded by medieval scribes and church officials. Therefore, during the lifetime of a single person, his name was often spelt in many different ways, explaining the many spelling variations encountered while researching the name Lepoer. Some of these variations included: Power, Powers, le Poer and others.

Notable amongst the family up to this time was Richard Power (1630-1690), 1st Earl of Tyrone was the eldest son of John, Lord de la Power of Curraghmore, co. Waterford who died in 1666. "The lords justices and council directed that no one should molest the Curraghmore family, and when Cromwell came to Ireland he issued an order on 20 Sept. 1649 setting forth that Lord Power and his family were 'taken into his special protection.' None of the Powers were excepted from pardon in the Cromwellian Act of Settlement, but...
Another 90 words (6 lines of text) are included under the topic Early Lepoer Notables in all our PDF Extended History products and printed products wherever possible.

Migration of the Lepoer family

In the mid-19th century, Ireland experienced one of the worst periods in its entire history. During this decade in order to ease the pressure of the soil, which was actually depleted by the effects of the previous years' grain crops, landowners forced tenant farmers and peasants onto tiny plots of land that barely provided the basic sustenance a family required. Conditions were worsened, though, by the population of the country, which was growing fast to roughly eight million. So when the Great Potato Famine of the mid-1840s hit, starvation and diseases decimated the population. Thousands of Irish families left the country for British North America and the United States. The new immigrants were often accommodated either in the opening western frontiers or as cheap unskilled labor in the established centers. In early passenger and immigration lists there are many immigrants bearing the name Lepoer: John and Joan Power, who settled in Jamaica in 1654; Walter Power, who settled in Jamaica in 1685; William Power, who settled in Barbados in 1685; Catherine, Charles, Edward, George, James, John, Lawrence, Martin, Michael, Nicholas, Patrick, Thomas and William Power, who all arrived in Philadelphia between 1840 and 1860.