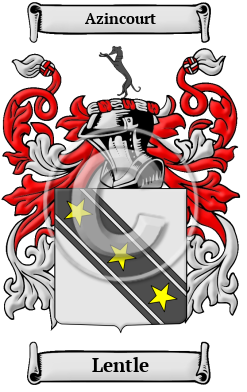 The name Lentle is of Anglo-Saxon origin and came from when the family lived in the chapelry of Lenthall found in the parish of Aymestrey in the county of Hereford.

Early Origins of the Lentle family

The surname Lentle was first found in Herefordshire at Lenthall. However, later some of the family were found at Yelford-Hastings in Oxfordshire. "This parish, which originally belonged to the family of Hastings, was purchased by Mr. Speaker Lenthall, whose descendant, K. J. W. Lenthall, Esq., is the present lord of the manor." [1] The same gentleman was later found at Besselsleigh in Berkshire. "Sir Edmund Fettyplace sold [the manor of Besselsleigh], about 1620, to Wm. Lenthall, master of the rolls, and speaker of the house of commons in the Long parliament, from whom it has descended to Kyffin J. W. Lenthall, Esq. The old manor-house was pulled down about fifty years later: Cromwell, who was a frequent visitor, usually concealed himself in a room to which the only access was by a chair let down and drawn up with pulleys. Sir John Lenthall, son and heir of the speaker, and governor of Windsor Castle, was buried in the chancel of the church in 1681." [1]

Early History of the Lentle family

This web page shows only a small excerpt of our Lentle research. Another 95 words (7 lines of text) covering the years 1620, 1591, 1662, 1622 and 1681 are included under the topic Early Lentle History in all our PDF Extended History products and printed products wherever possible.

It is only in the last few hundred years that the English language has been standardized. For that reason, early Anglo-Saxon surnames like Lentle are characterized by many spelling variations. As the English language changed and incorporated elements of other European languages, even literate people changed the spelling of their names. Scribes and monks in the Middle Ages spelled names they sounded, so it is common to find several variations that refer to a single person. The variations of the name Lentle include: Lenthal, Lentall, Lenthall and others.

Another 40 words (3 lines of text) are included under the topic Early Lentle Notables in all our PDF Extended History products and printed products wherever possible.

Migration of the Lentle family

Many English families tired of political and religious strife left Britain for the new colonies in North America. Although the trip itself offered no relief - conditions on the ships were extremely cramped, and many travelers arrived diseased, starving, and destitute - these immigrants believed the opportunities that awaited them were worth the risks. Once in the colonies, many of the families did indeed prosper and, in turn, made significant contributions to the culture and economies of the growing colonies. An inquiry into the early roots of North American families has revealed a number of immigrants bearing the name Lentle or a variant listed above: George Lentall settled in Virginia in 1637; Rowland Lentall settled in Nevis in 1663; Christopher Lentall settled in Philadelphia in 1749; Barbara Lentill settled in Virginia in 1650.